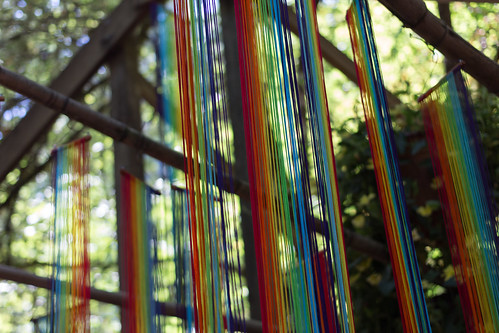 [Image Description: A backdrop of a sun-dappled forest, with green leaves criss-crossing over small glimpses of a blue sky. In front, several rainbow banners hang, at varying distances from the camera. They are not solid pieces of fabric, but look neatly tattered, as if someone tied many different-colored strands to the same oblong hanger. They cascade in long, beautiful colors out of the frame.]

Sexuality has always been a weird thing to me.

Growing up in a conservative Christian community, I quickly learned that talking about anything sexual was off-limits. Not only off-limits, but bad. Not only bad, but sinful. As a kid, that word used to scare the shit out of me. I feared anything described as a sin, anything that threatened to send me to hell.

Mixed up in all of this was, of course, the issue of sexuality. In my case, I was lucky, because I’m attracted to men and I enjoy relationships with men. I never felt a sense that something was off or missing when I was with guys. Simply put, I identify overall as straight.

That meant I never had to sit through a church service that told me God forbid me from having a relationship with another person, no matter how deeply I longed for it. Or that my feelings of romantic love and attraction toward men were wrong, sinful, perverse – that I was an abomination in the eyes of God. As a straight person, nobody in church said that God would send me to hell due to the feelings I was born having.

But I was present for many of those services, and I trusted the people who gave them. As I grew up, I held strictly to the literal interpretation of the Bible. I called myself “a Christian warrior,” because I cared about people. I was taught that some people wouldn’t go to heaven, and I had a duty to protect them from this fate. I felt a deep connection to God. I felt called to engage with other people and help them escape their sin so that they wouldn’t go to hell, even if it damaged my relationships with them. Whether or not they recognized it, I was trying to save them.

That’s why I felt that in order to follow God, I simply couldn’t believe it was okay for someone to be anything other than straight. How could I when the Bible said they were going to hell?

I’m very familiar with what the Bible says about being gay. But over time, I’ve also become familiar with the fact that the Bible was written thousands of years ago by straight men, in a time where any differences from the norm were rejected and misunderstood. I came to realize that other parts of the Bible that condoned slavery and racism are now largely understood to be a reflection of antiquated times, and yet writings about gay people are, for some reason, still considered relevant. I’ve heard the thoughtful interpretations of the Bible by gay Christians, who don’t feel they’re compromising their Biblical beliefs at all by being gay.

Most powerfully of all, I saw the effect of these harmful beliefs on LGBTQ+ people. I’m talking about the beliefs that prompt us to tell LGBTQ+ people they must give up all hope of having romantic love, marriage, or family, while we are free to pursue fulfilling love lives. These beliefs cause us to reject and disown the LGBTQ+ people in our lives after they had the strength to accept themselves and the courage to share their identities with us. At the end of the day, these beliefs are so rooted in hatred and rejection, that the only option many LGBTQ+ people see is to get rid of themselves.

My own change of heart on this issue stemmed from a simple recognition: nobody but God knows, without a doubt, what the afterlife is going to be like for any given person. I certainly can’t claim to know the mind of God. So when people in my life began to come out, I chose not to make any speculations about their souls, and I decided instead to focus on the overarching theme of the Bible, which is about love. More than that: unconditional love.

I know that many straight Christians say they love the sinner, they just hate the sin. But love does not include caveats. I don’t think it’s possible to truly love someone while simultaneously rejecting a huge part of their identity. And that is a very important thing to realize, by the way: sexuality is part of who a person is, not merely an outward behavior they can choose to engage in or refrain from. Kathy Baldock of CanyonWalker Connections has pointed this out in the debate of whether people can choose their sexuality. If you’re straight, I think it’s less common to feel a sense of identity from your sexuality, but that’s simply because you live in a world made largely for straight people. We don’t ever really think about it.

So if I tell you I love you but your sexual identity is sinful, damning, and repulsive, what I’m doing is trying to dissect you and choosing only the parts of you that are acceptable to me. I doubt anyone would agree that this is love, however loudly I proclaimed it to be. Jesus died for all of us without picking and choosing only the parts of us that He found acceptable.

I know that many anti-gay Christians say they’re coming from a place of love. And you may really, genuinely feel that you love someone even while condemning their sinful lifestyle. But by that logic, we all live sinful lifestyles, and among Christians who count someone’s sexuality as part of that, I don’t understand why the “sins” of an LGBTQ+ person are somehow worse than the sins of anyone else. No other “sin” seems to require the same kind of drastic rejection and disassociation.

Jesus’s love compelled Him to die for us. He didn’t simply have a feeling, but demonstrated it unquestionably through His actions, and it didn’t make any of us suffer in the process. Jesus’s love certainly never made me want to take my own life.

Another thing many straight Christians believe is that they’re acting in the best interest of the person. Love is also about caring for a person’s ultimate well-being. It’s true that there may be situations when someone doesn’t feel our love because we’re acting out of a place of concern for their long-term health, happiness, or self-esteem, and they may not be able to see that. For Christians, the final fate of someone’s soul is a huge part of a person’s well-being. I agree. But what this mindset ignores is a person’s well-being here on Earth, which also matters, and it’s undeniable that these beliefs are very damaging to LGBTQ+ people’s well-being.

Once again, I don’t feel I’m in a position to determine what the ultimate fate of someone’s soul will be. I’m not God. That’s why I’m not going to risk someone else’s current sense of self-esteem and mental health – someone else’s will to live – based on my own imperfect judgment about their eventual fate. Not only is this incredibly arrogant, but the cost of being wrong is just too high. I choose instead to focus on making sure people are feeling God’s love here and now, and I leave the future unknowns up to God, the only One who can know.

I know that many straight Christians are coming from a place of good intentions. I came from the same place. But when these good intentions were resulting in the deaths of other people, I had to question what good those intentions really were.

If Jesus died as an ultimate expression of love and forgiveness for all of us, then I don’t have the right to make anyone feel as if they’re unloveable and unforgiveable. If Jesus came to bring us hope in the message of the Gospel, then I’m not going to make other people feel hopeless.

Learn More
– The Trevor Project (resources and support for LGBTQ+ people contemplating self-harm or suicide)
– John Pavlovitz: The Toll of Our Christian Theology on the LGBT Community
– Redemption Pictures: Why I Can’t Say Love the Sinner, Hate the Sin Anymore
– Matthew Vines: The Biblical Case in Support of Same-Sex Relations
– Patheos: Clobbering Biblical Gay Bashing (Why anti-gay isn’t Biblical)
– Relevant Magazine: 5 Things I Wish Christians Would Admit About the Bible
– Patheos: 10 Anti-Gay Things You Can’t Do While Following Jesus
– Ryan Yezak: The Gay Rights Movement
– SoundlyAwake: How It Gets Better
– Michael Lindsay: Being Gay and Christian
– PFLAG: Parents, Families, Friends, and Allies United With LGBTQ+ People
– TransWhat?: A Guide Towards Allyship
– ElloSteph: How to Actually Be an Ally